If you’ve been searching around you’ve probably come across the Ancel FX6000 OBD2 scanner. Is it the one you need?

I personally put it to test to find out the good and bad things about it. Read on Ancel FX6000 review and find out whether you should have it on your shopping list or scrap it for another scan tool model. 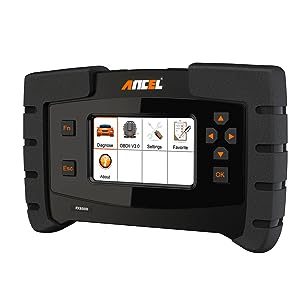 4.4 / 5
You certainly need one whether you are just a car owner, DIY enthusiast or auto mechanic. It will help you pinpoint issues in a vehicle’s onboard systems and aid the repair process.
Check Price at Amazon

The scanner works great on any OBD2-compliant vehicle. So far I have used it on over 30 OBD2 vehicles.

And in case you are wondering, it can diagnose both gasoline and diesel-engine vehicles that are no more than 12V.

It is primarily an OBD2 tool and as such it supports all 10 OBD2 test modes and protocols.

Interestingly, it even works on some OBD1 vehicles. I used it on a 1994 Buick LeSabre and it was able to communicate with the vehicle’s computers.

The included Ancel guide claims that you can use this scanner on vehicles that were made as far back as 1992. At this point, I can comfortably vouch for it to do that.

The scanner’s coverage is more than impressive. It’s actually better than some high-end professional scan tools that only support OBD2 vehicles.

Impressive as the coverage was, I still experienced instances where the scanner couldn’t connect to a vehicle’s computer.

Additionally, the kit doesn’t include OBD1 adapters. I had to buy mine separately. But you do get the OBD2 main cable and a CITROEN-16C connector.

As a code reader, the Ancel FX6000 review shows it is an excellent tool. It pulls and clears codes in all available systems, including engine, transmission, ABS, and SRS.

That means you can use it to reset the Check Engine Light and other warning lights.

The FX6000 can read and clear trouble codes. Well, that’s a basic function of all OBD scanners, but not many can do it as fast as this unit.

It takes less than 20 seconds to display codes and just about 2 minutes to clear.

And the booklet contains a list of generic codes for your understanding. Even better, the scanner itself tells you whatever is wrong with the vehicle. You don’t need to look up the codes.

When it comes to reading and clearing codes the Ancel FX6000 is practically flawless. My only complaint is that it doesn’t save codes. Meaning you can’t recover any erased codes.

Arcording to the Ancel FX6000 review, it is far more than just a code reader. It supports ECU coding and programming. Additionally, it supports the diagnosis of SAS, DPF and TPMS sensors.

You can use it to reset EPB oil service and do IMMO.

Scanners of the Ancel FX6000’s price range rarely come with these many advanced features. But this one does. And the FX6000 allows you to view live data in both text and graphical formats.

You can also view freeze frame data. These are all handy features to a professional auto mechanic like me as well as ordinary car owners.

No complaint on this front. The Ancel FX6000 passes as a simple code reader until you try its advanced functions. That is where it impresses the most – even better than some high-end options.

The Ancel FX6000 is one of the easiest scanners you will ever have to set up. It is a plug-and-play device, but you need to update the software first.

If you fail to do that it may fail to connect with the ECU of any/every vehicle.

Luckily the update process is quite simple. Head over to Ancel’s website, register the scanner using its serial number, download the software and then install.

Note that you need to do all that while it is connected to a PC. There’s a USB cable provided for that.

Also, you will be asked to provide the car brands that you need to cover. Be sure to list all the vehicles that you may need to test.

The setup process is simple and straightforward. It’s even outlined in the user guide. In case it gives you a problem (like I did on my first attempt) try stopping the update and then starting it again.

The first attempt was not the smoothest. It started to update well but then stuck halfway through the process. I had to stop it, unplug the scanner and then restart the update again.

Also, you cannot update it on a Mac system. If you don’t own a PC you may want to look for one to use to update the Ancel FX6000.

Who Should Buy It?

So far I’ve been impressed with the Ancel FX6000 OBD2 scanner. It is a professional-grade scan tool with plenty of basic and advanced features and functions to offer.

That makes it a great addition to any garage or auto repair shop. If you are a car owner or DIYer you probably won’t use some of the functions, like coding and programming.

For the price, the Ancel FX6000 is a pretty good deal. It does much more than most intermediate scanners.

If anything it is closer to high-end OBD scan tools that cost up to 10 times its price.

And the FX6000 Ancel can serve ordinary car owners, DIY-ers and professionals alike. So despite the few flaws, it’s quite a solid device if you asked me.