After receiving responses from the customer on the performance of MaxiDiag MD808, Autel presents us with MaxiDiag MD808 Pro as a replacement for the older model. Thus, why don’t we take a look at this Autel MD808 review? 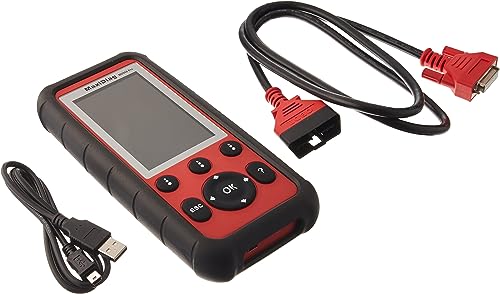 4.3 / 5
The scanner capable of read and clear trouble codes.
Check Price at Amazon

And one that keeps popping up almost everywhere would be the Autel MaxiDiag Advanced MD808 (MD808 Pro). However, you will not see too many Autel MD808 Pro reviews around.

This Autel Maxidiag Advanced MD808 came with a free lifetime update as long as you don’t lose your receipt. Now, let’s jump right into this Autel MD808 Review.

Autel MaxiDiag Advanced MD808 came in a well-built plastic carry case. This Autel scanner itself was neatly tucked in a rugged rubber case.

Also included in the carrying case was an OBD/CAN interface cable, a user manual and a USB cable.

The carrying case is quite lovely. It is black in color and has a large, red ‘Autel’ print on the side. At the top is a handle that makes it easy to carry

You will love the portability if you are an auto mechanic whose work involves a lot of moving around.

Autel MaxiDiag MD808 Pro boots up as soon as you connect it to a vehicle and start the ignition. It only takes a few seconds to start up completely.

Then Autel Maxidiag Advanced MD808 prompts you to choose your region, manufacturer and then enter the VIN.

Once all that is done the scanner displays a menu that contains 4 items, which is

This Autel scanner actually checks all systems. It can read and clear engine, ABS, SRS, transmission, BMS, EPB, DPF, SAS, ECU and any other system codes.

Not many OBD2 scanners offer that kind of flexibility.

When doing codes you can choose to pull codes from individual modules or from all the modules at once. The same goes for clearing the codes.

Perhaps the best part is that you can do all that with just one push of a button. It really makes basic diagnostics very easy.

There’s a large LCD display that makes reading and clearing codes simple and fun. The user manual is detailed too, you can rely on it on this.

The only bad thing about using the Autel MaxiDiag MD808 Pro for codes is its slow speed. It’s a bit slow, especially when scanning American and European-made vehicles.

But it works like a charm on Asian vehicles.

Most ordinary car owners only use OBD2 scanners to pull and clear codes. If you have the Autel MaxiDiag MD808 Pro you can explore a little deeper and test other functions.

That’s where Autel MaxiDiag MD808 Pro really comes into its own, with almost everything you may need in an OBD2 scanner.

With these facts, you can see that Autel MaxiDiag MD808 Pro is, in fact, a fully-fledged scanner. Most of the Autel MD808 Pro reviews also agree with this point.

You won’t get such many advanced functions in other scanners of its price range.

The MaxiDiag MD808 Pro not only displays codes but also live and freeze frame sensor data in graphical or text format.

Error codes come with their descriptions. Even if you are new to OBD2 diagnostics you will know what each code means.

While it doesn’t affect accuracy, the delay can be annoying if you are in a rush.

And if you don’t know that it tends to delay you might opt to exit the screen thinking that it doesn’t support those functions.

Apart from connecting the Autel MaxiDiag MD808 Pro to a vehicle’s OBD2 port, the other connection you can make is to a PC via USB. Most of the Autel MD808 Pro reviews do not place too much focus on this part.

However, it is still one of the most important aspects that you should pay attention to.

If it fails to make the connection you have the option of taking out the SD card and inserting it into a PC directly.

You will need that connection when updating the device or when you want to analyze and print data on a PC.

But even after a successful PC connection, this scanner can only print text, not graphs. And you will get an unformatted text.

Autel MaxiDiag MD808 (MD808 Pro) works on almost all OBD2 compliant vehicles regardless of the brand that is made after 1996.

Most of the time it will identify a vehicle automatically and lead you to diagnostic functions. While the connection speed varies, it is a generally fast diagnostic scanner.

However, it failed to connect to several other new vehicles. Some examples are

In those instances, it could neither identify the type of vehicle nor connect to the vehicle’s computer.

Due to the fact that models didn’t even exist in the scanner’s menu.

So if you are a car owner you may want to confirm whether your make and model is supported before you buy this OBD2 scanner. After all, not that many Autel MD808 Pro reviews even bother to mention about this issue.

Who Should Buy It?

It’s not a perfect tool but the Autel MaxiDiag MD808 Pro is ideal for professionals and DIY enthusiasts. You can clearly see that from this Autel MD808 review.

It has an impressively powerful processor that boots up fast and supports a huge database of data. A lot of Autel MD808 Pro reviews forget about this kind of advantage, but that will not lessen its importance.

That speed and library are priceless to someone who does auto repair for a living. For its price this device is a steal.
Check Price at Amazon

Overall, the MaxiDiag MD808 Pro balances functionality and cost better than any other scan tool.

It has an affordable price tag but features functionality that is comparable to what high-end tools offer. Meaning you get great performance in a cost-efficient package.

That’s a pretty good deal for any DIY enthusiast or if you are just starting your professional auto repair career. This Autel MD808 review will hopefully help a lot with your decision.

Scroll back to top